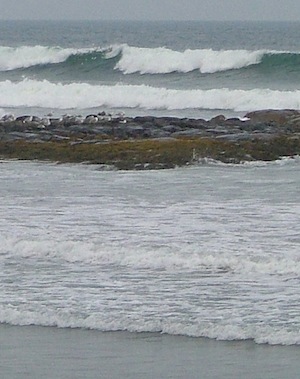 Fred Schueler and Aleta Karstad, and their assistant Adam Zieleman have returned to eastern Ontario from the fourth and as-yet longest trip of the 30 Years Later Expedition. During August and September they traveled throughout New Brunswick and Nova Scotia, over the season producing 3250 new natural history records in the database and uploading 99 on-site paintings to their blog which is described as "..wonderful. And, I enjoy receiving them beyond words. Your computer-shared paintings are like having an art gallery at home. Again, thank you." (Nancy Jennings).

The 30 Years Later Expedition is a transCanada Biological Survey launched in the International Year of Biodiversity, in partnership with the Canadian Museum of Nature, primarily revisiting sites where Fred Schueler and Aleta Karstad have made observations and collections since 1970. The project involves databasing, upgrading, and revisiting observations recorded in their field notes, as well as sketching and painting on-site, and testing the hypotheses about possible ecological change that they had in mind when they made the initial observations, or that have arisen since. The 2010 field season has included trips to northeastern Ontario, central Ontario & the Lake Ontario shore, and New Brunswick & Nova Scotia.

The first Maritime destination was the Jacquet River Gorge Protected Natural Area Bioblitz, where the 30 Years Later team joined 17 other scientists and one other artist for two weeks of exploring and cataloging the biodiversity of this largest of New Brunswick's newly established Protected Natural Areas. The New Brunswick Museum, the main sponsor of this event, has purchased five of Aleta's oil paintings and two of her watercolours, all done during the course of the Bio-blitz.

After the Bio-blitz the Expedition headed for Cap Lumiere, near Richibucto, New Brunswick, camping and exploring on the beach that they described and illustrated in 1976 and 1978 for the book Canadian Nature Notebook. Four oil paintings resulted from this 34 Years Later re-visit. Two of three Gannets found dead on the beach (featured in a painting by Aleta) were prepared as the first skeletal specimens of Gannets for the New Brunswick Museum, which confirmed the death of one by gunshot.

Since there was less previous experience in Nova Scotia than in other provinces, exploration there emphasised the distribution of native and invasive colonies of the Reed Phragmites, to characterize the natives & see how widespread the invasives are, in the hope of inspiring interest in suppressing the invasive European strains before they totally take over salt marshes (as they have in coastal States such as New Jersey), and the roadsides (as they have in areas of Ontario and southern Quebec). True to the independent Nova Scotian character, the few colonies found couldn't be easily classified as native or invasive, and the specimens will have to be studied by experts before it's known what their status is.

The expedition mapped the distribution of a variety of alien invasive roadside plants, recording striking regional differences in the frequency of Tansy, Japanese Knotweed, Purple Loosestrife, Pink Jewelweed, and the invasive Phragmites. They also found a range extension of the brilliantly red-flowered Hairy Willowherb on the roadside of the interchange between Nova Scotia highways 101 & 102, emphasising how little we know about some of our most looked-at habitats.

One of the highlights of the Nova Scotia leg of the expedition was Hurricane Earl, through which the Expedition made a safe camp in an opening in a regenerating clearcut, inland from the coast. The autumnal calling of Spring Peeper frogs was monitored through the course of the storm. Martinique Beach, known locally for its big waves, was visited by the team both before and after the hurricane, resulting in an oil painting and many interesting observations, including vegetation along the coast killed by salt.

NatureList member Bev Wigney hosted the Expedition at her place in Round Hill Nova Scotia, where a single large specimen of the invasive Cathartic Buckthorn that has taken over so many Ontario roadsides and fields was found and suppressed.

A poster paper entitled "Trajectory and Herpetological Results of the 30 Years Later Expedition" was presented at the meetings of the Canadian Amphibian and Reptile Conservation Network in Wolfville, Nova Scotia, where it was great to meet colleagues, inspire one another, and share recent findings. After the meetings the expedition visited Kejimkujik National Park, launching a survey of terrestrial snails & slugs, and freshwater mussels in the park - and producing a plain air painting looking into the top of a 500 year old Hemlock.

The Nova Scotia Museum of Natural History hosted a lecture by Fred on the Maritime discoveries of the 30 Years Later Expedition, entitled "Stalking the Wild Conspicuous," followed by a showing of Aleta's maritime paintings, and an out-of-doors painting workshop.

On the return trip, the expedition mapped the distribution of native and invasive Phragmites along the transCanada Highway through the Tantramar marshes of the Chignecto Peninsula, and worked at recovering locations of their 1976 survey of the distribution of Crayfish and Salamanders in New Brunswick, though water levels were too high to actually sample the sites.

The expedition has returned to its home base at the Bishops Mills Natural History Centre, where Aleta will continue to produce daily paintings through the winter as Fred writes up this year's results. Next year's plans are still tentative, but it is hoped that enough funding will be available to allow the expedition to head west across Ontario, the Prairies, and British Columbia to sites all across Canada that they studied in the 1980s.

Summary: This trip was a bit of a dash of 2696 km along TransCanada Ontario highways 416, (4)17 and 11, north and south, to and past places and projects we've worked on in the past, stopping at one place each day for Aleta to do a daily painting of a scene. We continue to experiment with improvements in getting data, together with GPS waypoints, into the computer, and made many driveby waypoints of invasive Euphorbia cf cyparissias (Cypress Spurge), and invasive & native Phragmites, as well as monitoring for Taraxacum palustre (Oldfield Dandelion), the "victim of invasives" Prunus nigra (Canada Plum), and finding a northernmost Polygonum cuspidatum (=Fallopia japonica, Japanese Knotweed). We also waypointed road-killed Mammals, and began sampling for sites which the invasive roadside snail Xerolenta obvia hasn't reached. Our herpetological projects included waypointing of on-road Amphibians, which was thwarted by dry weather, monitoring the distribution of Leopard & Mink frogs at sites where we've known of them before, a beginning investigation of the effects of Earthworms on the Shaw Woods, and documenting spectacular egg mortality among Wood Frogs in this El Nino spring. We also checked in on Zebra Mussel abundance in the Muskrat and Mississippi rivers, and revisited the site visited in 1977 for the "Burn" chapter of Canadian Nature Notebook. This report concludes with all the field notes, as output in an EOBase Narrative of 600 database records.
See full document...

What can we do to increase awareness of habitat loss, invasive species, and human impact on nature?
There is no other independent organized group in Canada which is dedicated to promoting long term monitoring. This is your chance to support the work of Fragile Inheritance.
About the book...
FRAGILE INHERITANCE:
a painter's ecology of glaciated North America

lavishly illustrated with watercolours and
descriptive prose from sea to sea
drawing the baseline for
a legacy of beauty and
change - Aleta Karstad
and Frederick W .
Schueler's life work